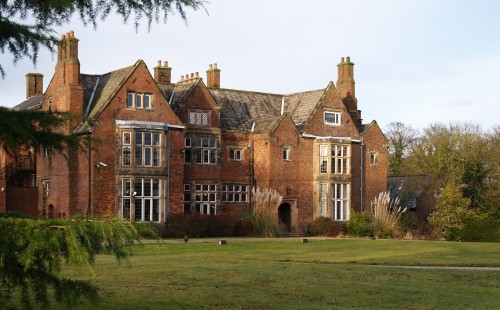 The History of Heskin Hall is a lengthy one. Construction started on this, the New Hall, in c.1545.  In 1666 the Hearth tax records show it to be the largest property upon the manor, with 15 hearths.

The first assumption people make is that the history of Heskin Hall must include a “Heskin” family.  Surprisingly, although there is a “de-Heskin” family that appears in the records, they do not appear to have any links with the Hall.  Earliest records (1212) describe Eccleston and Heskin as one “Knights Fee” held by Roger Garnet.

It’s in its later history that references to some of the most well-known names in English history appear.  In 1506 these lands, and others were sold to Edmund Dudley, Minister for Henry VII (later executed for treason).  Although initially forfeit, the lands did eventually pass to his widow, Elizabeth who married Arthur Plantagenet.  This meant it could pass to his son, John Dudley, Duke of Northumberland, in 1511.  He too fell foul of his ambition and was executed by Queen Mary.  The third generation of Dudley’s did no better, Robert was executed by Elizabeth I.  The Dudley’s misfortune was counterpointed by the rise of the Seymour’s.  They too held the land for this Hall but could not survive court intrigue and in 1556 the property was sold to a local nobleman, Richard Molyneux.

It remained in the hands of the Molyneux family until 1739 when it became part of the Mawdsley Estates until sold to Alexander Kershaw in 1744.  A wealthy member of the new Industrial Rich, he originally came from Rochdale.  He seems to have led quite a “free living” lifestyle.  He never married but left three acknowledged children. So at his death in 1788, it went to his brothers in turn – Edward Newman Kershaw, John Copper and James Kershaw.  By a will dated 1786 Edmund inherited but on his death (again without legitimate children) it passed to his brother John.  His death  in 1833 again without legitimate children led to a legal dispute.

It was the heirs of Mary (Kershaw) Scott who emerged victorious from court.  The main issue of the case seems to have been if her children where legitimate i.e. had she married their father.  The sister of Alexander she is said to have “escaped” from her wedding day fleeing the church door riding pillion with her lover, Ralph Scott.  The court accepted witness testimony that they has married there being no written evidence.

When was it Last lived in ?

The last people to occupy the Hall as a home were Lord & lady Lilford in the 1960’s.  She was an ex dancer and actress and on their divorce in 1969 the Hall went to her as part of her settlement.  Since then occupation has been commercial, including Blackburn College and a double glazing firm, who both used it for training purposes.

Probably the most talked about inhabitants of the Hall are the ghosts.  There were three documented but one left, it is said, with his piece of furniture many years ago.  The two remaining are the a young girl and an older man that are said to date from the Civil War.  The Hall and much of the surrounding County was a centre for much activity with several battles and skirmishes fought nearby. Indeed, the County saw many atrocities and fighting here was amongst the fiercest in the Country.

The Hall was allegedly an overnight stopping place for Oliver Cromwell as well as being a site for the hanging of religious martyrs.  Certainly the then owner, John Molyneux, is known to have declared for Parliament but only after the fall of Lathom House (a Royalist stronghold) and he had to compound for the estate.

As to the ghosts themselves they are said to be the those of a young Roman Catholic girl named Mathilda who was hanged by a Priest found at the Hall by Cromwell’s soldiers, as evidence of his conversion to Protestantism. Cromwell’s soldiers were unconvinced and hung him from the same spot.

Whatever the truth of it is on record describing the haste of some of her guests to depart as a result of sightings and incidents are reported regularly to this day by staff and visitors to the Hall.

For a more detailed  history why not ask our staff when you visit or, if you have a Group or club what about a Group Visit with a lunch & talk about the Hall form one of our staff? follow the link for information